Twitter locked accounts belonging to Senate Majority Leader Mitch McConnell’s re-election campaign and several prominent conservatives Monday, after they posted videos of left-wing protesters gathered outside McConnell’s Kentucky home — with one demonstrator calling for someone to stab McConnell “in the heart” and for McConnell to break his “raggedy” neck.

The episode prompted the McConnell campaign, known as “Team Mitch,” to slam Twitter for political bias, saying the social media platform had effectively blamed the victim. Meanwhile, observers noted, Democratic Rep. Joaquin Castro remains active on Twitter, even after he posted the names of San Antonio residents who donated to Trump.

“This morning, Twitter locked our account for posting the video of real-world, violent threats made against Mitch McConnell,” McConnell campaign manager Kevin Golden said in a statement. “This is the problem with the speech police in America today.”

Golden continued: “The Lexington-Herald can attack Mitch with cartoon tombstones of his opponents. But we can’t mock it. Twitter will allow the words ‘Massacre Mitch’ to trend nationally on their platform. But locks our account for posting actual threats against us. We appealed and Twitter stood by their decision, saying our account will remain locked until we delete the video.”

SAN ANTONE SELF-OWN: CASTRO OUTED ONE OF HIS OWN DONORS IN BID TO SHAME TRUMP SUPPORTERS

McConnell, 77, has been resting at home since tripping on his patio fracturing his shoulder on Sunday — and the Team Mitch account posted images showing him at his residence. In the wake of this weekend’s deadly mass shootings in El Paso, Texas and Dayton, Ohio, the hashtag “Massacre Mitch” trended on Twitter — and some activists took their case to McConnell’s residence.

In a livestream video of the protest, Black Lives Matter Louisville leader Chanelle Helm, standing with other demonstrators outside McConnell’s home, said that he “should have broken his little raggedy, wrinkled-(expletive) neck” rather than fracturing his shoulder.

“Just stab the m—– f—– in the heart,” Helm said, after a fellow demonstrator referenced a McConnell voodoo doll.

Helm told the Lousville Courier-Journal in an interview on Wednesday that she had no regrets.

ACTRESS UNDER FIRE FOR ‘SICK’ TWEET DIRECTED AT MCCONNELL

“McConnell doesn’t care about people who actually do break their necks, who need insulin, who need any type of medication, because they want to stop and prevent health care for all,” Helm said. “And that is something that every American out here wants. There’s only a few Americans who don’t want that, and those people are politicians and their cronies.”

As of late Wednesday, the Team Mitch had not deleted the offending tweet containing the video. Twitter’s policy for accounts violating its rules on certain offending content is to require the account owners to delete offending tweets in order for their access to be restored unless the conduct is so severe it warrants an indefinite suspension. 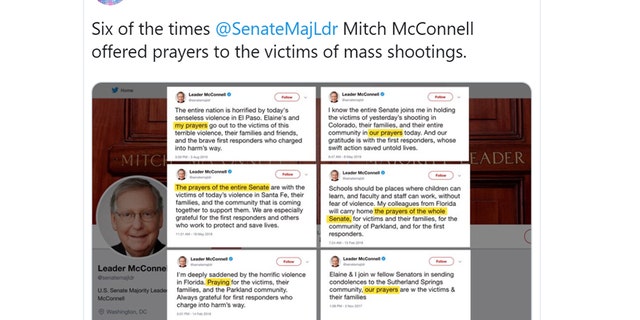 Its most recent tweet, made late Tuesday, Team Mitch called the threats outside McConnell’s home “serious calls to physical violence” and said law enforcement had been notified.

Twitter declined to provide an on-the-record comment. Because the video included an explicit call for violence, and took place steps away from McConnell’s residence, it apparently violated Twitter’s rules for anyone to post the video — including McConnell and his supporters.

But another Twitter user who posted the video, The Daily Wire’s Ryan Saavedra, said Twitter simply does not want the “Left’s pure hatred exposed because it damages the narrative that many at Twitter have.”

“By suspending me for telling the truth, Twitter is making it clear that they seek to control the news media and only allow content on their platform that does not expose the evil, projection, and hypocrisy of the political Left,” Saavedra wrote. “Do not be surprised if they permanently ban me.”

Saavedra added: “By suspending McConnell’s re-election campaign for exposing the violent rhetoric directed at McConnell, which was allowed to foment on Twitter for days, Twitter is interfering in the 2020 elections in a manner to help Democrats and hurt Republicans.”

Capitol Hill communications director Ben Goldey said that he, too, had been locked out of Twitter.

“My account was temporarily suspended after posting a video of far-left activists chanting death threats at Senator McConnell,” Goldey wrote on Twitter. “Meanwhile, @Castro4Congress tweet, targeting his own constituents by name and employer is still up and does not violate Twitter’s Rules.” 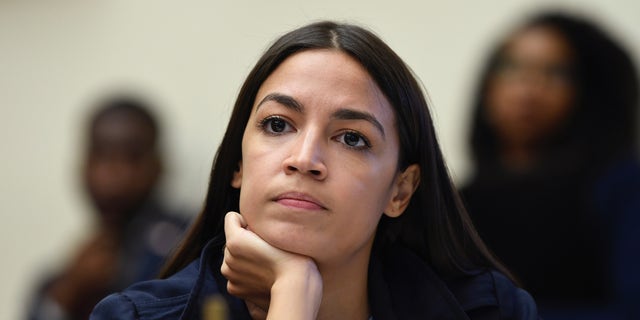 “Mitch McConnell has people on his yard threatening to “stab the motherf******” in the heart” & @twitter suspends MCCONNELL from its platform,” Jennings wrote on Twitter. “This nation needs to heal & this platform is actively removing voices from the conversation who can help find solutions. Absolute garbage.”

On Tuesday, McConnell’s campaign accused New York Democratic Rep. Alexandria Ocasio-Cortez of encouraging threats against the senator and “trying to dox some underage kids” after she blasted a group of McConnell-supporting boys who took a controversial photo with a cardboard cutout of her during a recent Kentucky political event.

“Rep. Alexandria Ocasio-Cortez and liberal Twitter personalities are trying to dox some underage kids for taking a photo with a cutout at the Fancy Farm political picnic and are cheering on thousands of accounts calling for Senator McConnell to ‘break his neck,’” Team Mitch tweeted.

In a tweet Monday, Ocasio-Cortez did not explicitly call for harassment or threats but she prompted a wave of negative reactions to the boys when she suggested that their gestures — “groping” and “choking” the cut-out, as she alleged — represented the “culture” of McConnell’s campaign.

After Ocasio-Cortez’s tweet, McConnell’s campaign responded by distancing itself from the photo, clarifying that the boys weren’t employees of the campaign. “Team Mitch in no way condones any aggressive, suggestive, or demeaning act toward life-sized cardboard cutouts of any gender,” campaign spokesman Kevin Golden said, according to the New York Post.

Golden added: “These young men are not campaign staff, they’re high schoolers and it’s incredible that the national media has sought to once again paint a target on their backs rather than report real, and significant news in our country.”

McConnell’s campaign appeared to downplay the photo by comparing it to one that a former aide to President Obama took after his election in 2008. The photo, posted at the end of 2008, showed Obama speechwriter Jon Favreau appearing to grope a cardboard cut-out of Hillary Clinton, then Obama’s choice for secretary of state.